Crook Peak is a hill I know well. One of the highlights of the Mendip Hills and an ascent I have made a large number of times in the last five-years or less. 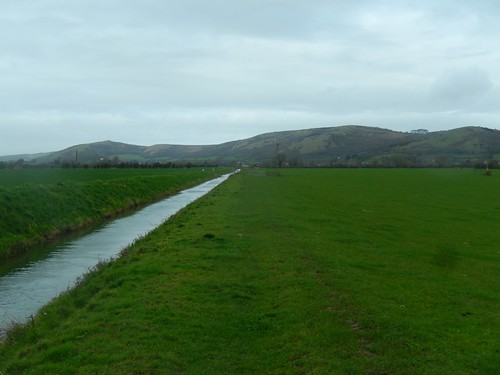 There’s a familiar route that I would most often follow… Usually starting at the foot of the hill but not arriving at its peak until close to the end, after an elongated circular walk.

This time, I would start further east and very close to the medieval town of Axbridge. 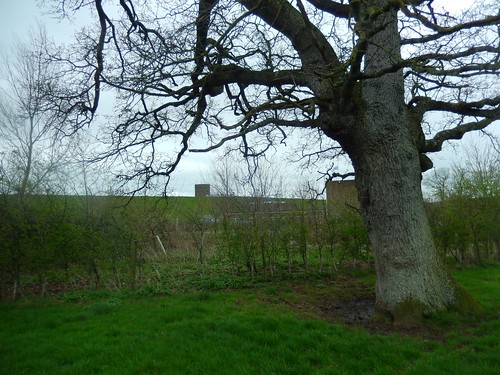 Parking in the town itself can be tricky or expensive, with pay-and-display the most welcoming option apparent to anyone not overly familiar with the area. But there is a free area for cars to park on the northern edge of the reservoir (most commonly known as Cheddar Reservoir, which natives of Axbridge may contest).

Ignoring a track that runs west and direct to the pumping station, I found a footpath running west behind a line of trees. There was no waymarking that I can recall but the metal kissing gate was a clear sign it was okay to proceed. 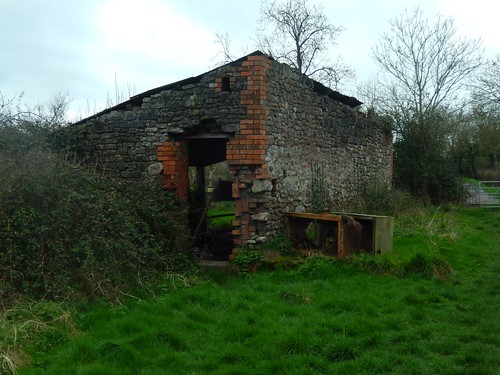 I passed an old farm building before reaching Portmeade Drove. I always find it interesting how so many agricultural buildings can be found in such a state of ruin… It almost parallels the rest of the country, where there’s a constant shortage of housing and a push from the government to get local councils building many new homes…

I think it’s a safe bet to say that, even twenty years from now, we’ll still be struggling to accommodate everyone. 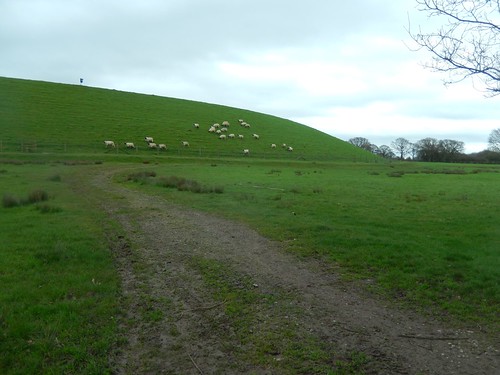 I don’t know very much about reservoirs, otherwise I might understand why they’re commonly built so high above ground level. As someone pointed out on my post-birthday walk the other week; Chew Valley Lake (also man-made) is very much the same.

Is it easier to build up than to excavate beneath the ground? There are plans somewhere to build a second reservoir in Cheddar, just south of the existing site. I hope that walkers will also be permitted to circumnavigate it.

It was at the end of this drove that I found myself looking to turn right on to Stubbington Drove (Track). But, there was no waymarking whatsoever surrounding this locked gate and I wasn’t confident in the idea of jumping the fence to plod along.

Perhaps I’ll reinvestigate this on another day; possibly be approaching it from a different direction. 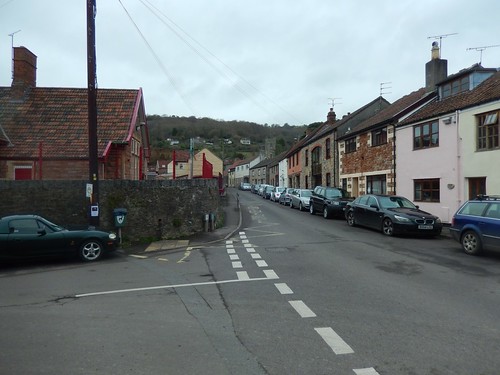 From the top of Portmeade Drove, I continued west and briefly in to an inhabited portion of Axbridge (the kind of setting I’d been hoping to avoid). 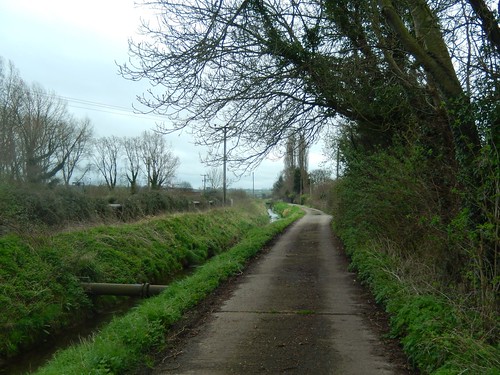 But it wasn’t long before I found a fingerpost directing me to a quiet track, walking alongside Ellenge Stream. 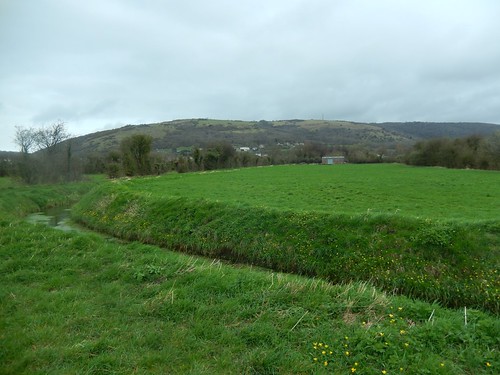 At the next junction, I would turn right and continue north-westerly alongside the Cheddar Yeo. It wasn’t until further on that I would find it was definitely a river.

Off to my right, the summits of Shute Shelve and Axbridge Hill. I would be visiting them before the end of my walk. 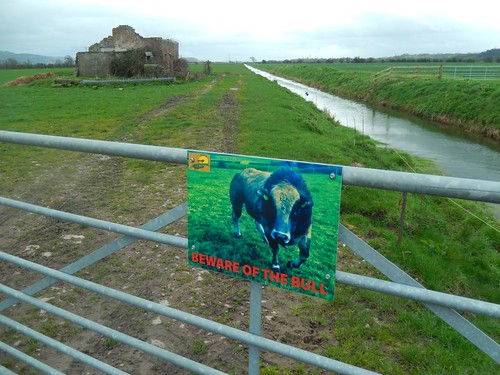 It was an undisturbed but wind-blasted walk around a moorland perimeter. Ground underfoot was quite harsh and lump. Probably a very wet one in the winter months. It wasn’t until I passed through the final gate that I turned around to find this sign…

Thanks, I guess! I could’ve been walking among bulls without even knowing it! Fortunately, there had not been a single cow for miles. I wonder if it’s an actual photograph of the bull that roams this land and, whether it complies with The Guidelines. 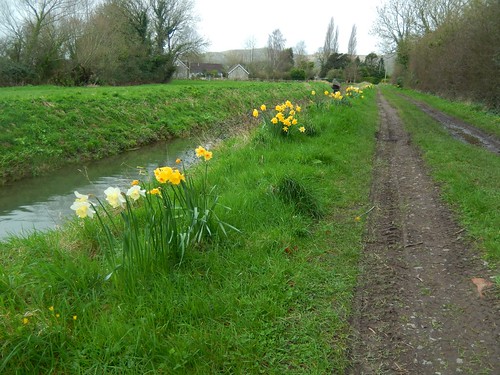 I was then ready to cross the A38 at Yeo Bridge. Having driven up and down this stretch so many times, I knew it was going to be busy, even on a Sunday morning.

Across the road, spring had arrived and I found a bench to pause at beside the next road bridge close to the village of Cross. 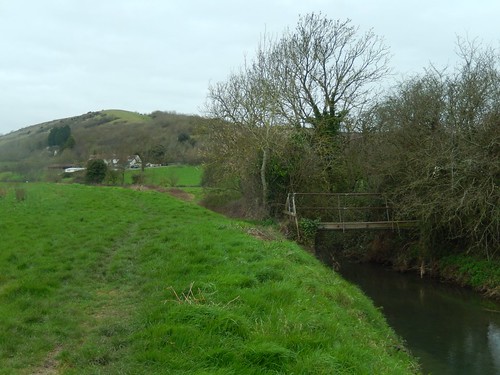 I followed the Cheddar Yeo for another mile before turning right to cross a narrow but secure footbridge and passing Dunnet Farm near Compton Bishop. 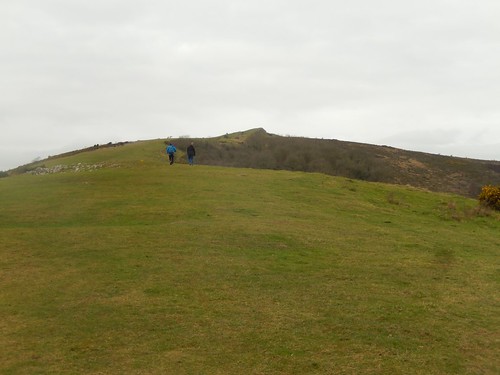 Beyond this, I would cross the road and begin the harsh ascent of Crook Peak from its south-eastern corner… 130m to go! 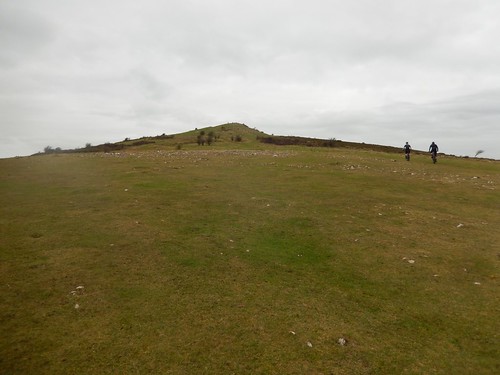 My walking poles were out and I felt ready. A pair of mountain bikers had already began their own journey to the top and, as they were only moving at a crawl, I decided to race them… 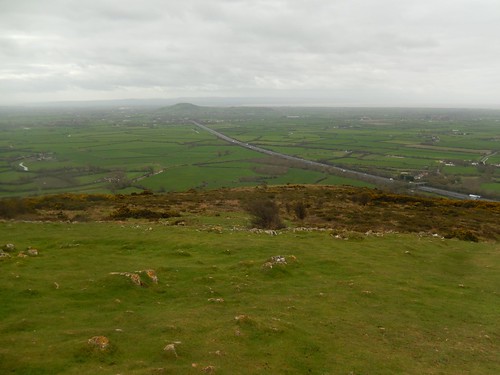 Of course, this was an agreement reached only with myself. I was going to beat them, whether they knew I was coming or not! 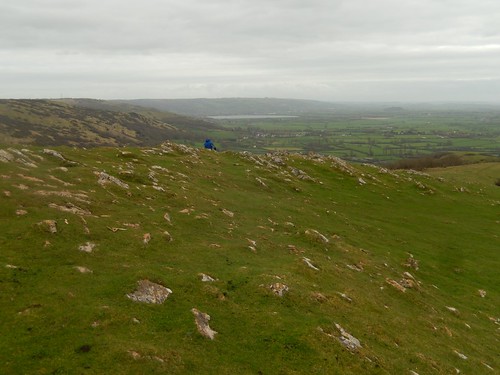 It was only really as I reached the rocky summit that I felt the symptoms of a shin splints injury set in to my left leg.

I’d felt this several times before and had always found the pain to be ‘inconvenient’, at best. Besides, I was a good four-miles from my car and on top of a hill, subjected to the coastal winds… I wasn’t about to phone Search and Rescue for this! 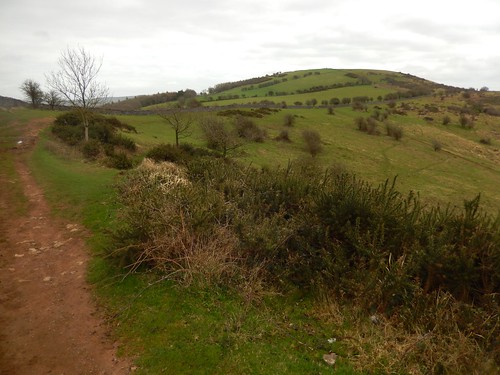 There were a few other people nearby and approaching Crook Peak. I hadn’t even sat down for a moment before I was marching on towards Wavering Down, keen to beat the crowds and escape the cold wind. 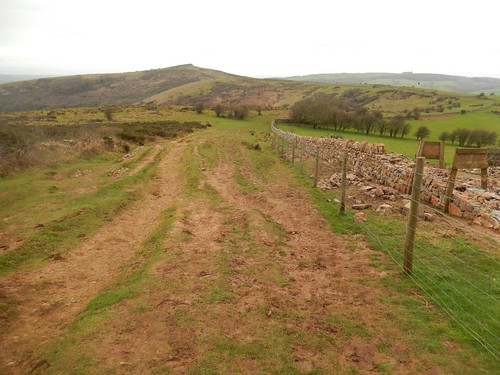 I felt it was good to see that volunteers are continuing in their efforts to restore the nearby dry-stone wall, which is a project that began over a year ago. 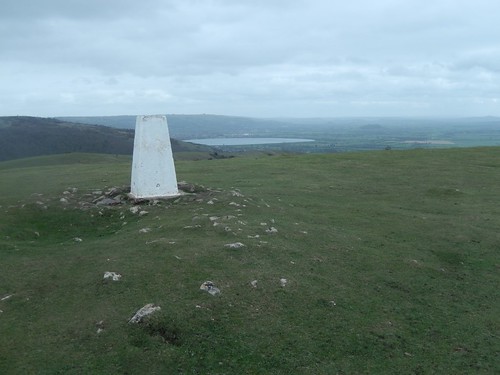 By the time I was on top of Wavering Down, the pain in my left leg had grown. On a positive note: I had the trig point to myself for a few minutes. 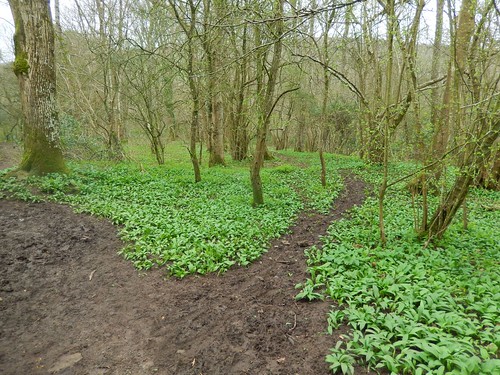 Continuing along the West Mendip Way, I walked down through King’s Wood to cross the A38. In the woods, spring was ready to come alive. I know you can find bluebells there in the spring [right now] and I imagine garlic is also ripe.

My leg, though, was becoming a concern. Walking on required a greater effort. If only I’d parked here… I was tempted to stop for lunch but also wanted somewhere quiet and knew there were a couple more across over the road. 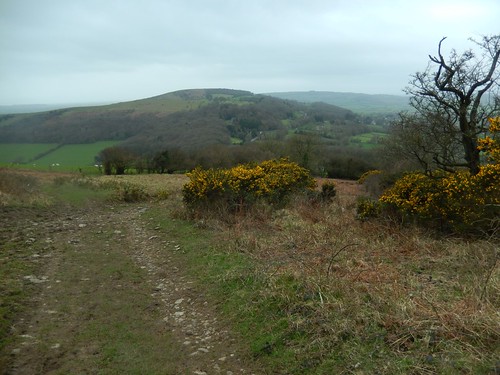 With what seemed like too much of an effort, I made it to the top of Shute Shelve Hill. In truth, I had never previously crossed it in this direction and only on the descent. Looking back towards Wavering Down, I felt concerned for the pain that appeared to be descending to my left ankle. 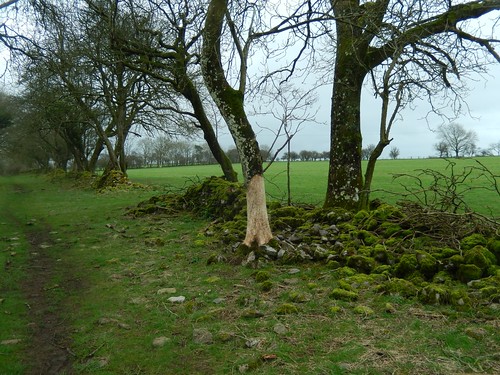 Only a couple of miles to go and it was going to be downhill, most of the way… 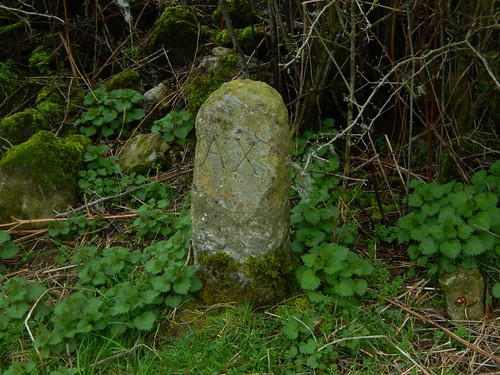 With no-one else around, I took a brief deviation from the ancient-looking Callow Drove (personally, I prefer this to Winscombe Drove) to eat my lunch in a vacant field. I would also find a boundary stone, inscribed with ‘AX’. 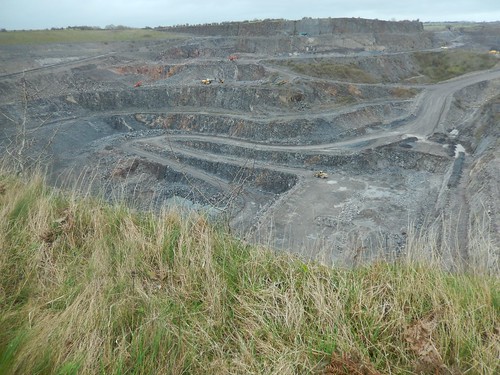 Plodding on with a pole in each hand, this pain was not going to ease. I passed the limestone quarry of Callow Hill for the first time in at least a couple of years. 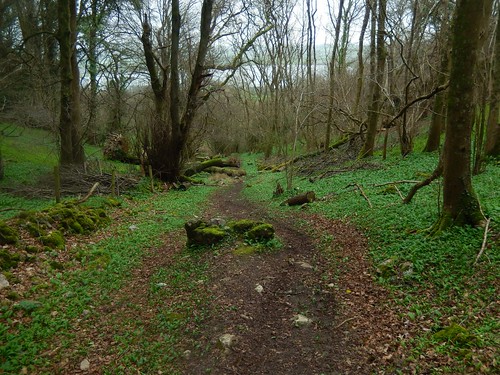 Continuing my descent, there were many moments where I really had to grit my teeth through the pain I was feeling. Had I broken my ankle?! A stress fracture? At least now, the reservoir was in sight.

I made it home safely but spending the rest of the afternoon and evening in some discomfort. I’d gone on to realise that my left ankle was very badly swollen (as some of you may have seen on Twitter and Facebook) and this would remain for the next three days, as I pushed on in to what was to be the final week in my previous job. 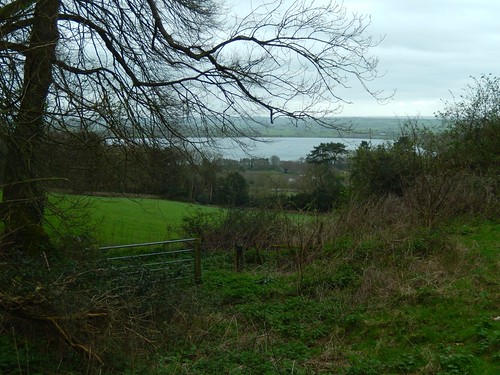 With the help of a bag of frozen chips and several doses of Ibuprofen, the swelling did go down. Of course, I had to take a break from walking. Each time I took a step at work, I wanted to yell from the pain shooting up to my left knee. A full fortnight would pass before I was able to walk in excess of three-miles without a long rest.

Next time you feel a pain or ache in your body, I hope you’ll stop and listen… As I probably didn’t do. There are always consequences to pushing through the pain. Worst of all: I had to spend less time outside, for awhile.

I still don’t know if it was because I pushed myself too hard or whether it was an issue with my footwear (this was before I swapped Superfeet Green insoles for Superfeet Carbon)… I hope I don’t find out too soon!

Distance of this walk: 9.5 miles