Beyond the halfway point in my first exploration of Sugar Loaf hill, I’d reached the hamlet of Llangenny and was looking for a place to stop for lunch. 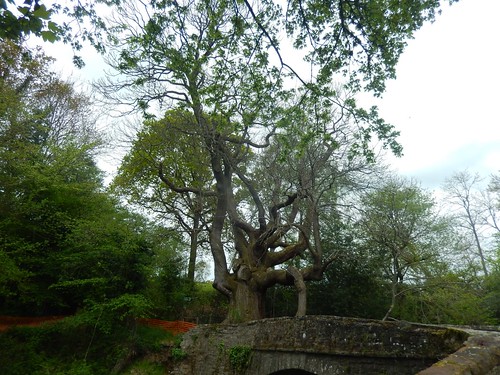 I’d hoped to stop somewhere near to Millbrook Bridge, beneath this towering old tree. But there were already a couple of people paddling in the river beneath me and I was craving something more in the way of solitude.

Following the river, I would continue. 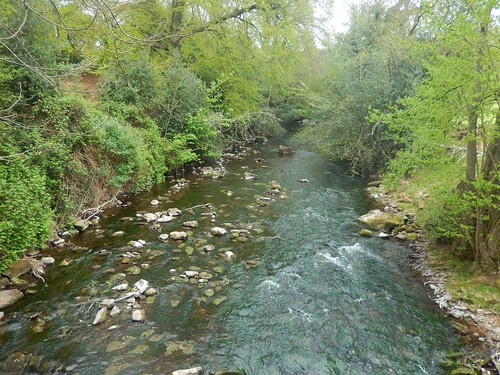 This is Grwyne Fawr and, further south, it deposits in to the River Usk.

On the opposite bank was an unlocked metal gate that appeared to grant access to private land owned by the MOD… But there’s also a waymark pointing left and there’s no suggestion of this right of way on the OS map.

Well, it was heading in the opposite direction to my own and so, it wasn’t worth investigating. I’m not a fan of loud noses. 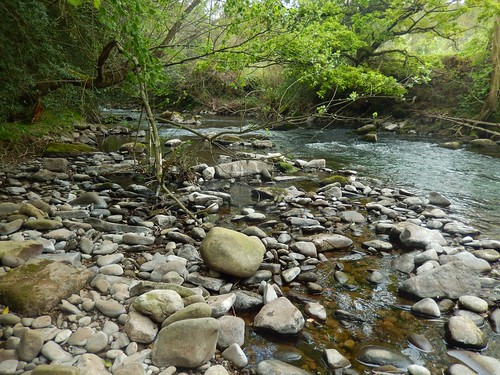 Following Grwynne Fawr to the north, I found a couple of discreet paths leading from the right of way and down to the water’s edge. Officially, I was trespassing but I wasn’t in conflict with the warning signs against fishing in this area.

I thought of this river as being very similar to the River Dulais, which I experienced with a friend in 2015, near Aberdulais. Wide, apparently shallow, quite fast moving and decorated with stones. I don’t see very many rivers like this in England and, yet over in South Wales, this is not my first. 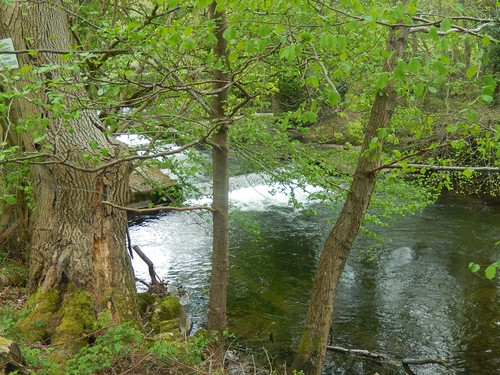 After my lunch, I noticed the weir down to the right, which becomes partially available as you enter the grounds of a small campsite.

I haven’t had much success in finding any details of the camp site although, Camping Mole has a listing for Llangenny that appears to be in the right place. It was a lovely spot, right beside the river, for those who don’t mind the public right of way driving through the middle. If you are looking to camp in or near the Brecon Beacons, you may still find Camping Mole’s leaflet to be of interest. 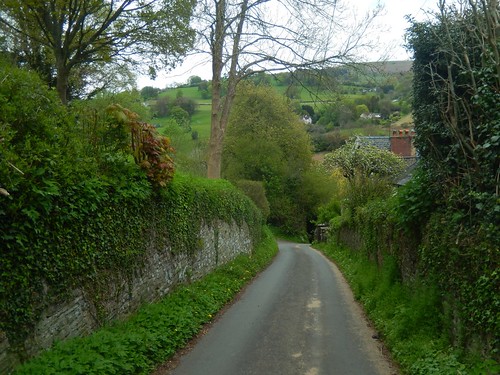 Shortly before leaving the camp site to reach a road, who did I find sitting under a tree?… It was The Trio from earlier, of course! Enjoying their own lunch stop.

I pressed on left up the hill before following my intended route, in the hope of finding the Standing Stone as highlighted on the map… In a matter of metres, I’d climbed a very steep hill and without encountering anything other than (probably) private gardens. There was no sign, as such.

I was probably looking in the wrong place, as it appears as though others have found the Llangenny Standing Stone, which looks to be within the camp site I passed through… 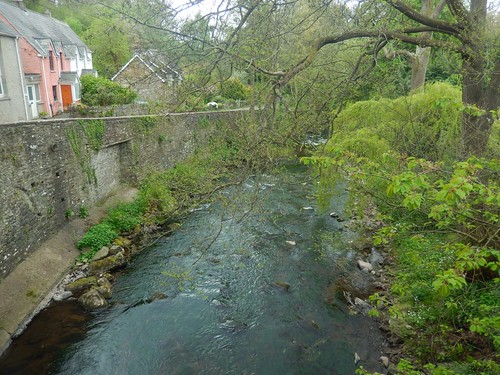 Back on course and to the crossroads at Llangenny Bridge, I encountered The Trio once more… Actually, they were a Duo, waiting for the missing piece to complete his toilet break inside the pub. 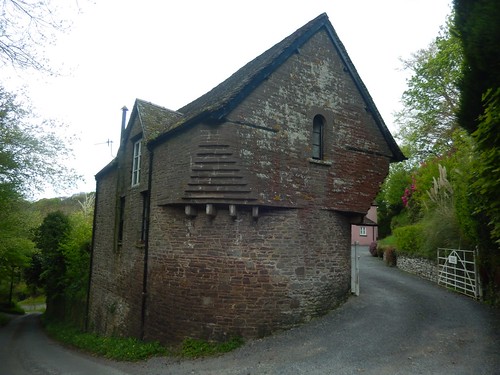 At the bridge, I was only 92m above sea level, while Sugar Loaf’s summit rises to 596m… You can see where this is going and it began with almost a mile of steep road walking! 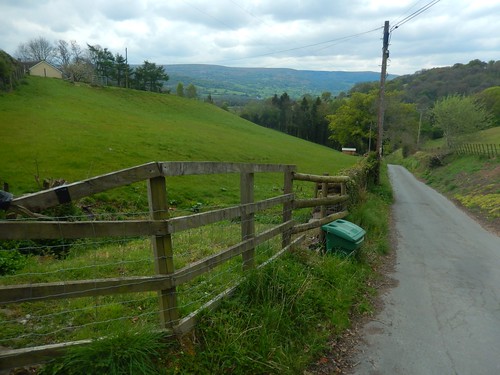 Before Cwm bach, I arrived at another crossroads, where I felt the urge to remove one layer. At the same time, I could see my followers beginning their own ascent. It was time to push on. 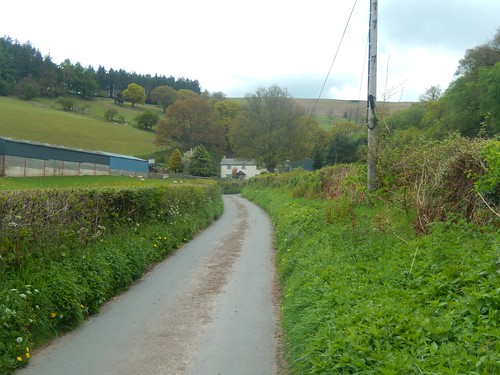 Beyond the farmhouse, you still cannot see the Sugar Loaf summit. Those are probably the southern slopes of Mynydd Pen-y-fal. 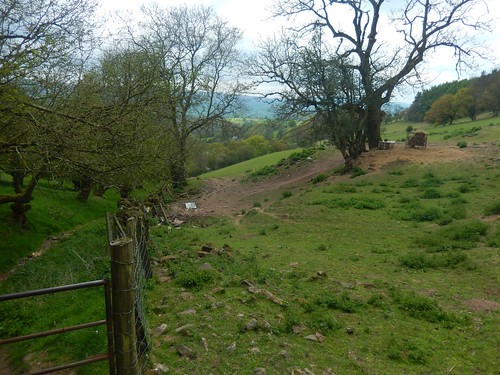 I followed a very rural-looking route up from the farm. Reminiscent of landscapes I have seen further north in Wales but, again, unlike much of the scenery that infills England. 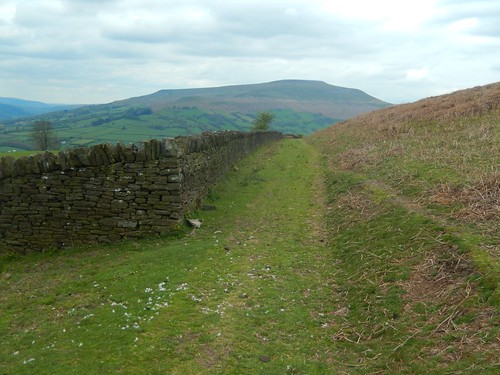 Somewhere around the 366m mark, I crossed the boundary on to open access land, with a pair of trail runners dashing on ahead. Immediately to my left was Crug Mawr.

Or, was it Pen Cerrig-calch?

Both, names I am familiar with but neither of which, have I yet to explore. It looks like they could be done in a single (long) walk. 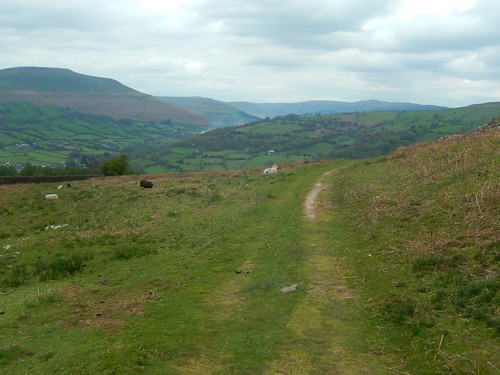 I could’ve taken a more direct route towards the summit but I stuck true to the Walking Englishman’s route; walking north, firstly, with those Beacons ahead. 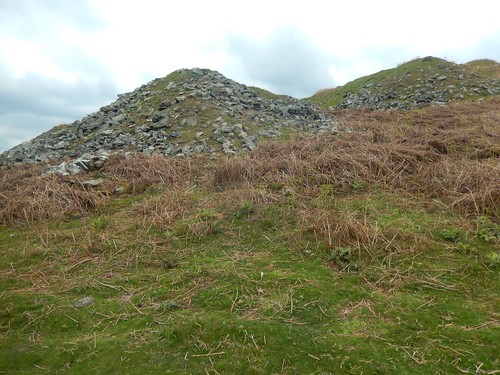 So far, Sugar Loaf was as hill-like as I had anticipated, but for a few stray stones. I wasn’t expecting it to change, as I began to climb higher. 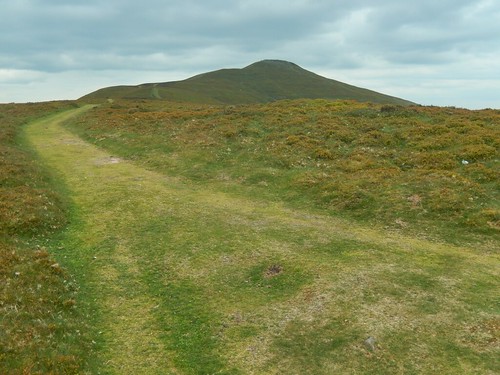 I can say from experience, that Mynydd Pen-y-fal is your typical false summit; a good 120m beneath the trig point. 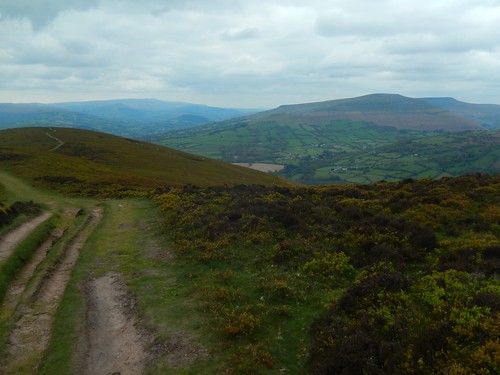 Some believe that this is the best way to approach and experience Sugar Load, from the western side. While the views are spectacular, I passed only a couple of other people. I’m guessing most visitors will follow a more direct route from the car parks to the south and east. 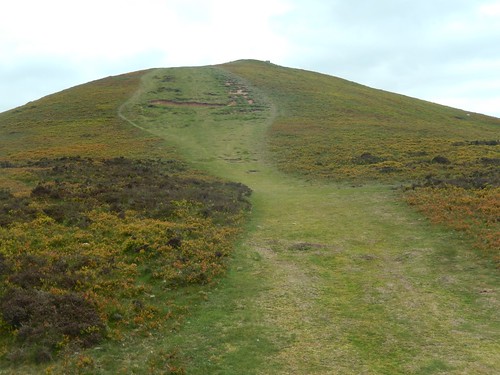 Climbing higher still, I could see a Grinch-like visage, where the right of way has been exaggerated through years of abuse.

While I would also like to recommend this easterly approach, it’s not one for the faint-hearted. Ascending 500m at any point in a walk is a challenge… To do this so late and on this particular route, well, I think it’s safe to say the Walking Englishman is a hardened Northerner! 😉

If I ever take a group along this, I’ll have to reduce the mileage or shift the start point.

Suddenly, this big hill transformer in to a mere mountain and I was scrambling up on to a ridge, not to dissimilar to Black Hill in the Black Mountains. 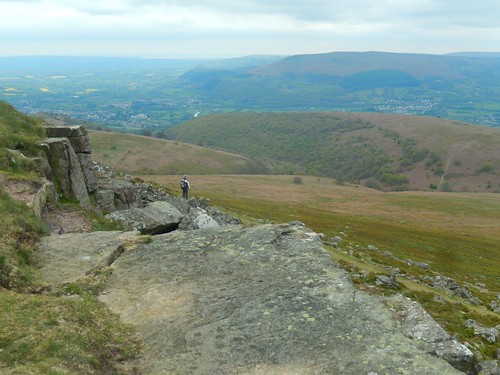 I thought I could see Pen Y Fan and Corn Du in one of my photos. Probably not the one above although, it’s tricky now to look back and understand in which direction the camera was pointing. 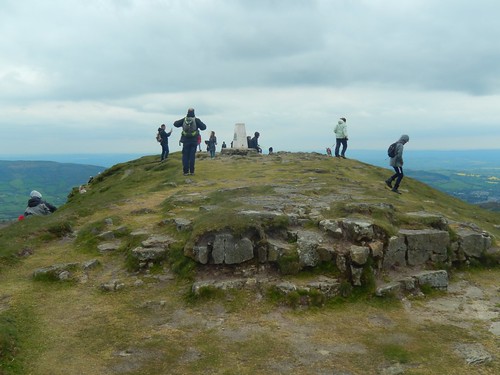 Just shy of actual mountain height, the wind was ferocious and I was greatly surprised to find so many others bimbling about the summit. 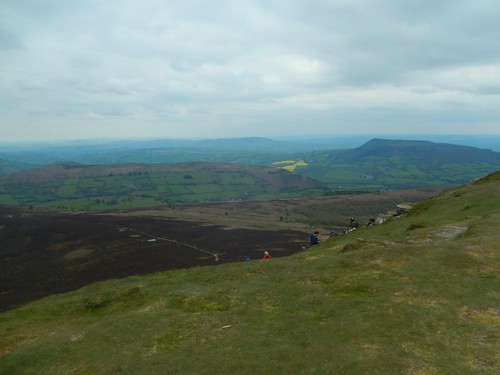 There was a queue for trig point selfies, while those who’d already tasted the social media limelight had sought shelter on the northern face of the hill. 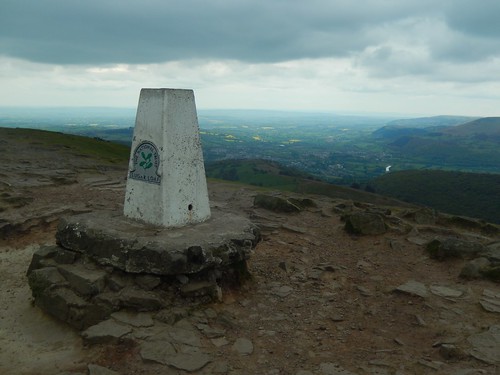 I did the very same, while I waited almost half-an-hour for the queue to clear. With every layer on, it had taken this long for the chill to begin to set in. Meanwhile, I’d found quiet amusement in listening to another conversation where they map owner was adamant that Ordnance Survey should highlight every Mountain Warehouse and Go Outdoors store on their maps…

If he’d have suggested Cotswold Outdoor, I might’ve given him some credit. 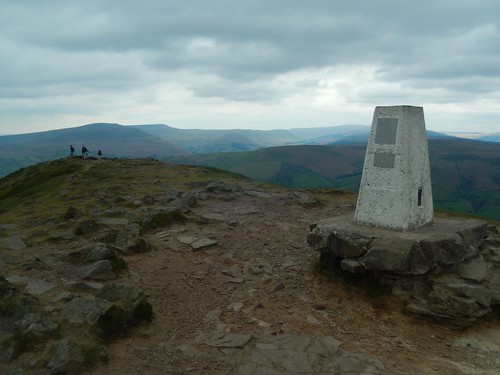 As I was getting read to go and begin the long descent to my car, The Trio had arrived. I don’t know if they saw me, all wrapped up, before bunkering down from the wind. I was pleased to see that they’d made as we’d been following the same route. 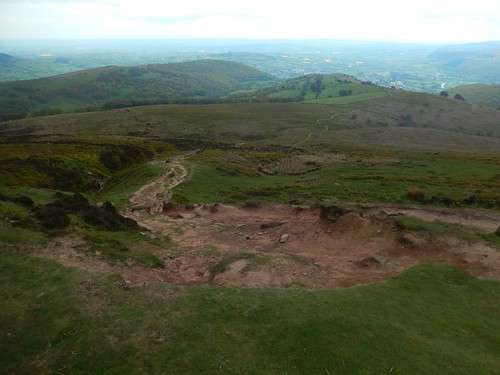 There are a number of different paths, meandering down from the summit. It may be tricky without a compass, unless you know the area well (and I didn’t see many others using a compass, actually). 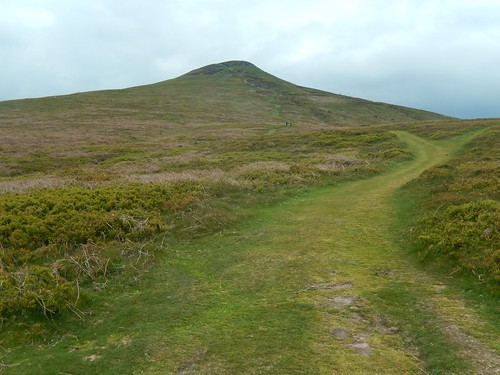 Sugar Loaf stands significant from the south east. On the way down, I passed a few friendly Welsh people, one of whom was wearing shorts and surely, in for a bit of a surprise on top! I remember wearing my hat, gloves and coat as we passed with a greeting. 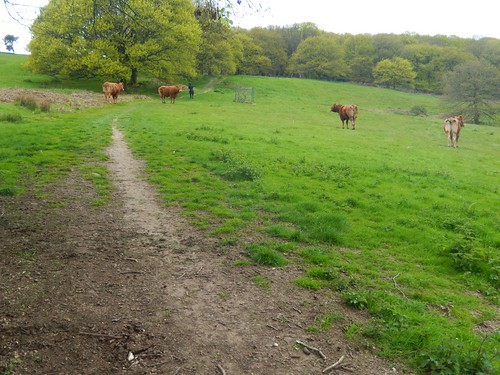 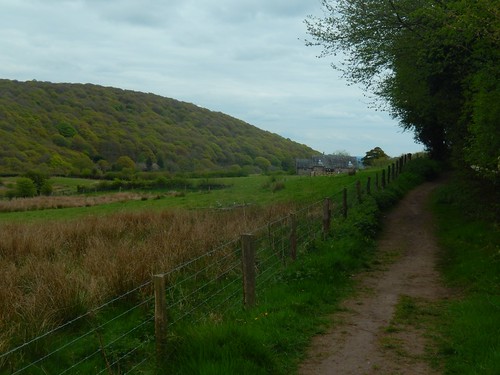 I favoured this direct route to the car because I was tired (understandably) and didn’t fancy going back over the footsteps I’d made in the very beginning. 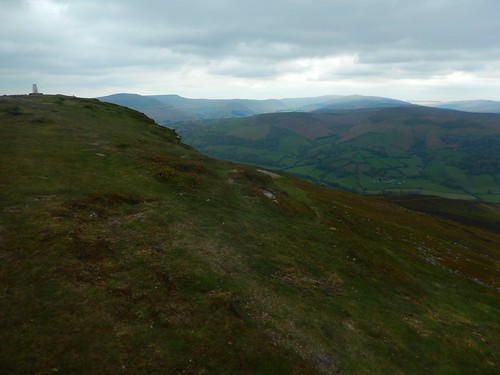 I’ve had thoughts about doing a group walk up to and around Sugar Loaf, because we rarely seem to stray far from Pen Y Fan when we do visit Wales. As it stands, I think this route would be too challenging for many people and I’d have to make modifications. I don’t know how keen I’d be to return here alone on a good day, having seen how busy it can get. But I’d certainly consider it with another or others.

My Route on OS Maps